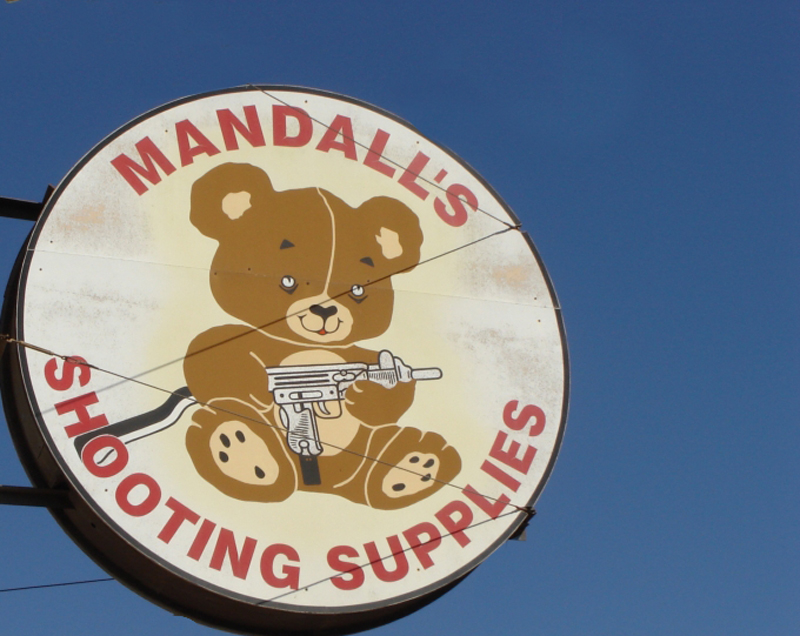 This article was written in the ARIZONA REPUBLIC about the Scottsdale Creative Arts Center, a project I am currently designing for owner Michelle Pelberg-Biely

A former Scottsdale shooting-supplies store with an underground shooting gallery is on its way to becoming a creative-arts center designed to bring artists together in a common space.

The iconic sign with a teddy bear holding a machine gun still greets passers-by, but not much else is left of Mandall Shooting Supplies, a family business that closed in 2004. The property, along the west side of Scottsdale Road just north of Osborn Road, has sat dormant for several years since.

Michelle Biely’s family purchased the property, and she has plans to convert it to the Creative Center of Scottsdale.  Biely currently operates a pet-photography business, Cow Dreamz Photography, out of her home.  Biely said she knew the location was right for the creative center as soon as she saw it.

“I think it’s the location,” she said. “I think a lot of it is Scottsdale is very artsy in itself … and it’s relaxed and within walking distance to everything, which is nice.

“I loved it the second I walked in. There’s just a feeling here that you can be comfortable and it can be so much more.”

The property, just south of Brat Haus restaurant, includes three vacant spaces: The former shooting-supplies store, a former auto garage next door and a smaller building in the rear that used to house Arizona Knitting and Needlepoint. The space that used to house Mandall’s will become the creative center, while the smaller building in the rear has been pegged for a potential coffee shop, Biely said.

The auto-garage space could house another creative business, such as a dance studio or florist, she said.

Dan Semenchuk, a downtown advocate and unofficial spokesman for the area, helped persuade Biely to house the creative center at the location. He is founder of Creative Connect, an organization that brings together creative people for communication and collaboration.

“I was certainly interested because for the past 10 years, as long as I’ve been doing Creative Connect, I’ve felt like there’s been a need to have a space for creative people,” he said. “I spend my days in downtown Scottsdale and … there’s so much cool stuff happening down here.”

“It will be nice to have the corner cleaned up and revitalized,” he said. “I’m excited about having a new neighbor and look forward to working with them.”

After purchasing the property, the first step was clearing out the interiors of the buildings, Biely said. The next step will be determining the design of the space.

There are two large safes in the former gun shop that will be incorporated into the new center, she said.

In the mid-1980s, the Mandalls built a shooting gallery under the store. It includes five, 25-yard tubes for rifle and pistol shooting. It was Scottsdale’s first indoor shooting range.

Above the gallery is a walk-in vault, which will be used to store supplies, said Biely, who purchased the building from the Mandall family.

“I’m hoping the shooting-range part is going to be where we have a conference room, and we’ll probably do art installations down there or something creative so people can actually get down there and see it,” she said.

The exterior along Scottsdale Road will be sandblasted and awnings will be installed, Biely said.

During a recent visit to the building, a resident stopped by hoping to purchase the sign, but Semenchuk told him it’s staying with the property.

Biely plans to move her photography studio to the center, and her friend, Josh Durmaj, will be moving his woodworking business from his home to the center. It also will include more studio space, and then the “rest will be common space,” she said.

“There will be a kitchen, a lobby and a space for other artists to work,” she said.

The artists will pay rent monthly for the space, so the mix of artists could change regularly, Biely said.

“I know there are people who are looking for studios, but can’t afford it,” she said. “This way people will come here knowing everyone gets to work together, and hang out and bounce ideas off of each other.”

Martin Mandall opened his shooting-supplies store around the corner in 1974, and then moved it to the space along Scottsdale Road in the mid-1980s. His son, Mike Mandall, remembers when the property housed a laundromat, a feed and supply store, a transmission-repair shop and a Dairy Queen.

“I worked in the business until the mid-’80s and then I moved on to my own business,” he said. “It was full of guns. At one point, there was 10,000 firearms in there. It was one of those places where you could find anything in there.”

Martin Mandall ran the business until health problems forced him to retire. His wife, Joyce Mandall, then took over.

“It served him well, he did really well,” he said. “The gun business could have continued to be a great business, but I was in another industry and there really was nobody else to step up to it.”

Biely wants to incorporate the gun shop’s history into the creative center. The building’s next chapter may be as a haven for artists, but it will always be known as Mandall Shooting Supplies, she said.

Those interested in sharing their experiences with the gun shop can e-mail her at mpelberg1@gmail.com.

“We’ve been offered photos of what the place used to look like before, so I’d love to get my hands on those and put them up and around,” she said.

“I’d love to get people’s stories, whether they e-mail me or tell them to me. I’d love to write them down and get them written on the walls of the building,” she added. “When you have something with so much history, you really have to preserve it or it will get lost.”

If you enjoyed this article, you might also enjoy: