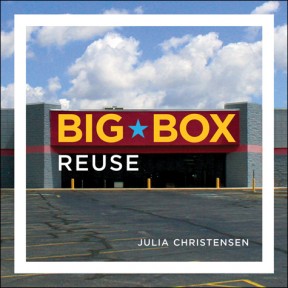 Big Box Reuse promises a post-big-box world where abandoned Wal-Mart and Kmart stores become churches, museums and motor raceways.  As Julia Christensen states, “adaptive reuse is happening all around us” and all we need to do is “stroll around your neighborhood [to] reveal adaptive reuse on most every block.”

Unfortunately, because Ms. Christensen believes “the building itself does not necessarily have to change nearly as drastically as its image has to change,” her analysis does not assume a critical perspective of her subject as she breathlessly presents programmatic interventions with limitless admiration.  A more compelling inquiry would not only discuss projects that modify the big box programmatically, but also question how form relates to image and how the architecture impacts the community the big box building serves.

Big Box Reuse chronicles ten adaptive reuse projects focused on re-programming Wal-Mart and Kmart stores. The book’s narratives focus on the community, the people, and the events that surround the abandonment and reuse of big box structures. Christensen reveals through her visual and verbal narratives the ways in which large, corporate retailers manipulate local laws and real estate deeds for their purposes.  By disseminating her research, she hopes that communities and local business can understand, navigate and perhaps even change a system established to favor and promote large corporate retailers.

Unlike one might expect (or at least what I had assumed), Christensen reveals that big box structures are not typically abandoned because a location is unsuccessful –many are vacated when the store is especially successful. Often, successful retailers expand and construct a larger store down the street from the original location.  In order to protect the retailer’s financial interests, the retailer places deed restrictions on the old parcel preventing competitors from developing the land.  As a result, the more programmatically successful projects, according to Christensen’s research, have been public enterprises and a few non-competing private development examples.

Christensen shows unwavering support for the projects she chronicles.  As a result, her descriptions of the architecture convey overwhelming approval of any gesture to reoccupy the vacant structures.  Her appreciation and enthusiasm for those who have overcome the difficulty of dealing with the legal and logistical hurdles to placing new programs within the former community eyesores causes her to lose a critical eye and present every modification without analysis.  While I agree with the author that these new programmatic interventions are better than an empty and deteriorating box, the selected projects for this volume illustrate only first steps in how we can recycle big box buildings.

Christensen cites sustainability as a main reason for re-using these structures.  What can be more sustainable than keeping a building rather than tearing it down and starting all over again?  Unfortunately, Christensen does not address or question if or how the original buildings might be at odds with sustainable construction and community building principles.

For example, big box buildings are dependent upon and proliferate users’ need for a vehicle.   Rather than discuss the impacts of auto-centrism on our cities, she presents dominating vehicular access (expansive parking lots, vast freeway infrastructures between warehouse and store, and multi-laned roads cutting through cities directly into a big-box parking lot) as a positive feature that reuse projects exploit.  One example, while entertaining, takes this to the extreme.  The RPM Indoor Raceway not only keeps the vast parking lot, but brings speeding vehicles indoors for recreation (and along with it an oversized hvac system to push the exhaust out).  In an interesting twist, the owners also use the parking lot for additional auto-focused events within the community such as remote-controlled car races for kids.  Community, for Christensen and several of these projects, depends on and celebrates vehicles.

This is not to say that vehicles are evil, or their users immoral.  Christensen could have turned her story of the RPM Raceway into an interesting discussion of the impact vehicles have on our communities.  Do cars divide us, or can they also bring us together?  Does the parking lot always have to be a vast space devoid of activity and community?  What happens when community members reuse the parking lot in a new and creative way? Unfortunately, Christensen passes on the opportunity and only presents the RPM Raceway narrative from the perspective of the raceway owners and developers who ultimately fall victim to large corporate interests when they are forced from the property for a more profitable renter.

Christensen’s focus on the legal and logistical hurdles leaves her readers content to believe that changing the building’s sign is enough to modify the big box image and its impact on a community.  Between 1972 and 1984 James Wines and Alison Sky formed SITE and questioned the form of suburban retail with their Best Products Company facades.  Their sculptural interventions peeled away, pierced and even crumbled the brick façade like a ruin.  Like the SITE projects, today’s big box reuse projects could bring the same critical skepticism to the role of the big box within our communities.  Such investigations could gain even greater conceptual power through an analysis that incorporates the life span of the site as a reused big box structure.  Formal and organizational analyses could reveal and question the nature of big box stores in our communities.  Unfortunately, Big Box Reuse, and the projects it chronicles, missed this opportunity.