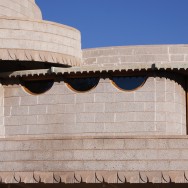 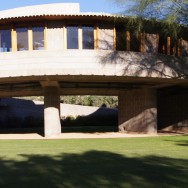 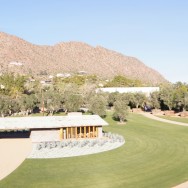 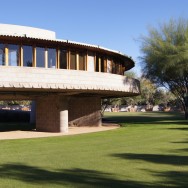 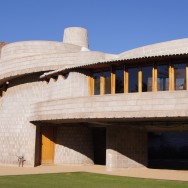 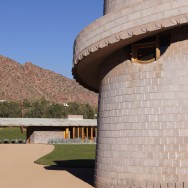 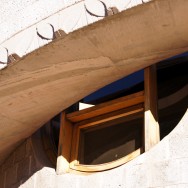 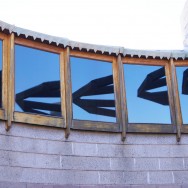 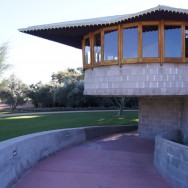 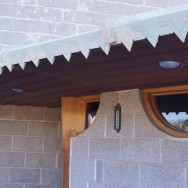 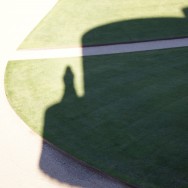 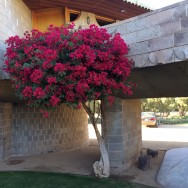 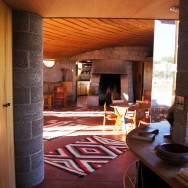 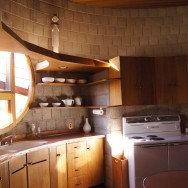 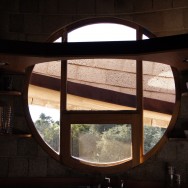 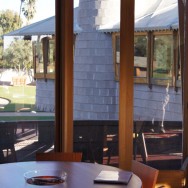 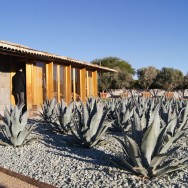 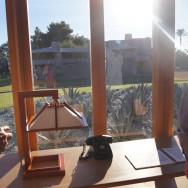 The David & Gladys Wright House by Frank Lloyd Wright was under threat almost two and a half years ago.  It is now being restored with a vision to not just revive the home from its near-death, but to elevate the masterwork to a position as a renowned icon.

Monday afternoon owner Zachary Rawling invited the City of Phoenix Historic Preservation Commission to visit the progress made on the home’s preservation and restoration.  Rawling led the tour showing the improvements made thus far as well as his personal affection for the home designed by Frank Lloyd Wright, “I used to bike through this neighborhood and by this house with my father when I was a kid.” 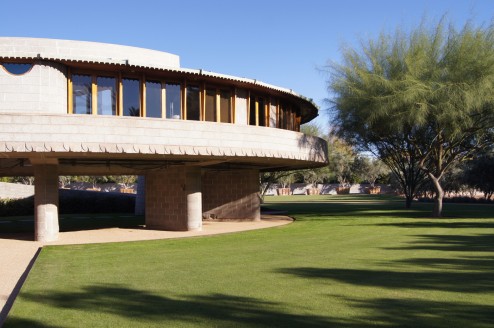 Rawling’s admiration for the building was a constant throughout the tour as he pointed out small details that fascinated him or stories about the home and its previous owners that struck him,  “This bougainvillea was David’s favorite on the property and these three rocks were original – Gladys would sit on this one as she watched the kids play in the pool.”

The site has been transformed from scrubby desert to perfectly manicured grass. Current plans include a 25,000sf below-grade museum, its future location illustrated by carefully arranged rock.  Access to the under ground museum will be along a sloping ramp similar to the home and leading under a reflecting pool on the surface that will mirror the circular footprint of the David and Gladys Wright home.  The museum will feature the history of the home while also acting as a community space where local artists will be invited to feature their work.  Eager to include the community in the project, plans also include children’s education about art and architecture.

“The restoration strives to remain sensitive to the original design intent, considering the surroundings equal partners with the architecture.”

The restoration strives to remain sensitive to the original design intent, considering the surroundings equal partners with the architecture.  Rawling has purchased adjacent properties so that he can restore the home to its previous sense of seclusion surrounded by citrus groves.   Features such as a grass berm topped by trees will block views of the homes at the base of Camelback Mountain while leaving an unobstructed view of the mountain’s top restoring Wright’s original views of the mountain as closely as possible. Designs also include two rows of orange trees on the property harkening back to the original surrounding orange groves.

Parking is also kept to a minimum on the site – to allow the architecture and the site to stand out on their own but also to keep the neighbors happy. Because the surrounding neighborhood has voiced concerns about eager visitors lining their streets with cars, Rawling has made arrangements to share parking with the adjacent church.  A door through the surrounding site wall allows access between the two properties.

Attention is also being paid to the much spoken of and beloved original carpet.  Pulling out many drawings of the original graphic design as well as a recently made sample, Rawling stated that they plan to recreate the original carpet and will have it installed by Easter.

The David & Gladys Wright House is on the docket for landmark designation on December 17th. They will be requesting another extension due to a desire to have the designation occur simultaneously with their zoning hearings for the museum.