Does your workspace help you create, think, concentrate and communicate?

We understand it intuitively: face-to-face conversations and chance encounters are the most important interactions for a creative, productive and engaged company community.  Having a teammate’s desk within accurate rubber-band throwing distance impacts how often you run an idea past her and how many opportunities you have to quickly dive into a brainstorming session.

How a space is designed, and as a result used on a daily basis, impacts our habits and how we interact with colleagues. 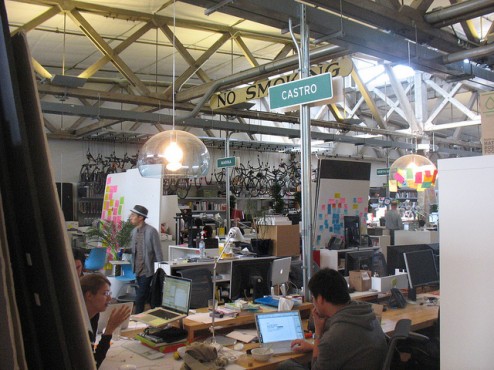 The idea that physical space effects communication is not new – the “Allen Curve” established by Thomas Allen in 1977 identified the strong correlation between physical distance and frequency of communication.   Did you know that you’re 4x more likely to communicate regularly with someone only 6 feet away than someone as far as 60 feet away?  If your teammate is on another floor or in another building you’ll rarely communicate and only when necessary. 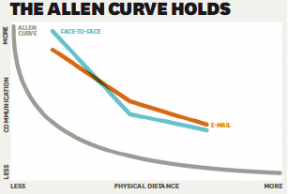 Interestingly, although digital communication has also transformed how we work, the Allen Curve still holds true.  Ben Warber has shown that engineers who shared a physical office space were 20% more likely to stay in touch digitally than those who worked elsewhere.  Coworkers sharing a space email each other 4x as often as those not in the same space. Why does how often we communicate matter?  Or with whom?  Because as you increase the number and quality of interactions new ideas emerge, people share tips and experiences, unexpected combinations occur and both productivity and creativity increase. Shouldn’t our workspaces be doing the work for us rather than the other way around?