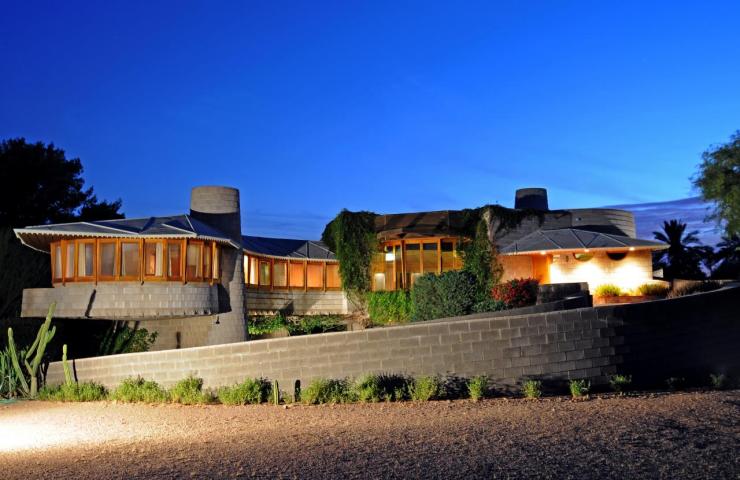 “Today we are reminded that architecture is, paradoxically, a fragile art form… The preservation of the Gladys and David Wright house will be our touchstone, our acknowledgement that our history informs our future, our celebration of, and call for, excellence in our community.”
- Will Bruder, words intended for the Planning Commission hearing for the Gladys & David Wright house in peril of demolition, Bloomingrock.com

Phoenix is not known for its architectural heritage – the climate and the landscape are our most memorable features.  Our city’s landmarks are the mountains that break the sprawling street grid: South Mountain, Camelback Mountain, Piestewa Peak and the Papagos.  Even our most notable architecture – buildings such as Taliesen West and the Phoenix Central Library – have stories that reference and integrate the surrounding landscape.  I began thinking about this when considering the recent battles over the possible demolition of the Gladys and David Wright House by Frank Lloyd Wright.  The 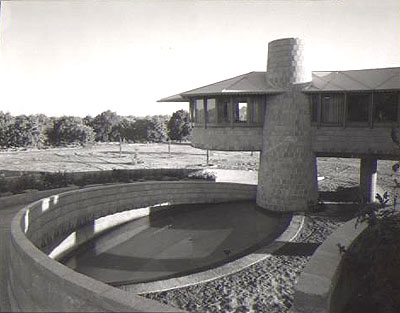 home illustrates Frank Lloyd Wright’s love for the desert making it integral to the architecture.  The building is isolated from its neighbors so that it can frame expansive views of Camelback Mountain to the north and the citrus groves to the south.  The curving block form both grows from the earth beneath and floats above it.  It is a sculptural object intended to be seen and experienced three-dimensionally. Phoenix’s best architectural examples continue a tradition of integrating with the landscape and sculptural buildings that stand separate from their surroundings define Phoenix’s architectural character.

Phoenix came of age during the 50s and 60s when connecting with the landscape was a central focus of modern architectural design.  Modern architecture was interested in blurring the line between a building and the spaciousness of its natural surroundings isolated from the impacts of the city.  Consider the images you’ve seen of the Villa Savoy by Le Corbusier, the Farnsworth House by Mies van der Rohe and Falling Water by Frank Lloyd Wright – they are all sculptures isolated in their natural surroundings.  Modernism pushed against the traditions of dense urban living in an effort to bring light, air and ease to a population that had had enough of the ailments and perils of city life.  Frank Lloyd Wright himself advocated for Broadacre City, a development pattern where each household would have a one acre plot and “a new standard of space measurement—the man seated in his automobile.”   Phoenix is a descendant of this concept.

This is in stark contrast to historic urban buildings where a decorative façade faces a dense Main Street.  Consider Whiskey Row in Prescott.  Attention there is given to intricate details around the windows and doors as well as perhaps how the roofline touches the sky, but the volume and mass of the architecture are not critical.  Architecture occurs in only one plane, facing the street.  It is this tradition of development that also creates a dense street life. The cities we know and love – San Francisco, Chicago, New Orleans and Paris all have dense street frontages that push more people into a small space, creating a lively urban environment.

“Phoenix’s past and future are in tension and Phoenicians must consider the difficult questions:  What kind of city do we want to be?”

Phoenix is now undergoing an identity crisis.  Throughout most of our development the belief in a sprawling, auto-centric city as the best formula for planning has not been questioned.  The pendulum is now swinging in the other direction as young graduates, creatives, and knowledge workers now desire a downtown lifestyle with access to public transportation, dense, mixed-use design, and a walkable urban core:

“For the first time in this country’s history, the majority of the population lives in cities. Leading this charge are the nation’s two fastest growing demographics: the baby boomers (born 1946-1964) and the millennials (born 1981-2000). The millennials, seeking work-life balance, short commutes and compact communities, wish to be near cultural, social and convenient amenities. They are looking for accessible education, recreation and cultural amenities; smaller workplaces with open spaces for creative interaction and meetings; close proximity to transit; and compact communities. In fact, the Orlando-based real estate advising firm RCLCO discovered that 88% of all millennials want to live in an urban area. CEOs for Cities reports that young adults with four-year degrees are 94% more likely to live in close-in urban neighborhoods than their less educated counterparts.”
- Downtown Denver: A Magnet for the Future Workforce a report by the Downtown Denver Partnership, Inc.

Phoenix’s past and future are in tension and Phoenicians must consider the difficult questions:  What kind of city do we want to be?  How do we progress into the future while preserving our past?  How do we reconcile living in a city with an auto-centric heritage while embracing a future that allows us to build upon the past?

Often the two sides of the preservation debate are cast as opposing extremes: preservationists on the one hand who want everything to remain as-is without allowing the flexibility to adapt for the future versus developers who are often cast as considering only profits.  We must find a middle road between these two extremes where we can preserve our unique cultural heritage while also allowing growth and change.

Because Phoenicians are new to this tension we’re not quite sure how to grapple with it. The Gladys and David Wright House is a clear example of a historic landmark that we must cherish and preserve.   However, in saving it we will have to accept change that will impact its intended character. While the developer has agreed to preserve and save the home – they are even willing to accept landmark historical status – they will also not be leaving the entire site as-is.  New homes will be constructed on the now spacious site, perhaps impacting critical sight lines to Camelback Mountain to the north.  The Mayor’s office is leading a collaborative effort between architects and the developer to negotiate an acceptable solution for both the developers who own the Gladys and David Wright home and the community who hopes to preserve it.  Questions to consider will be:  Where do we draw the line between increased density and preserving critical features of the Gladys and David Wright house?  How much surrounding development is too much?  Is it possible to maintain a historically spacious site while also allowing the developer to find the profits he seeks?  Are profits necessarily at odds with preservation or just one of many signs that we need to evolve into the future?

As Will points out in his comments on the Gladys and David Wright House, architecture is a fragile art form.  Although we think of architecture as permanent and ever-present, this is not the case.   Our buildings adapt and change as we adapt and change.  Phoenix must strive to keep and maintain its landmarks, but also evolve.  Without change our city risks a switch from fragile to stale.  It will be through the contrast of the old and the new and the development of new insertions that Phoenicians can create an interesting, unique, and beautiful city.  Much like European cities, we will develop layers that reveal who we are in each moment in time and what we value at this point in history.  I hope that Phoenix can show that we value the great treasures of our past but that we’re also cultivating a vibrant and exciting future based on sustainability, vibrancy, and beauty.