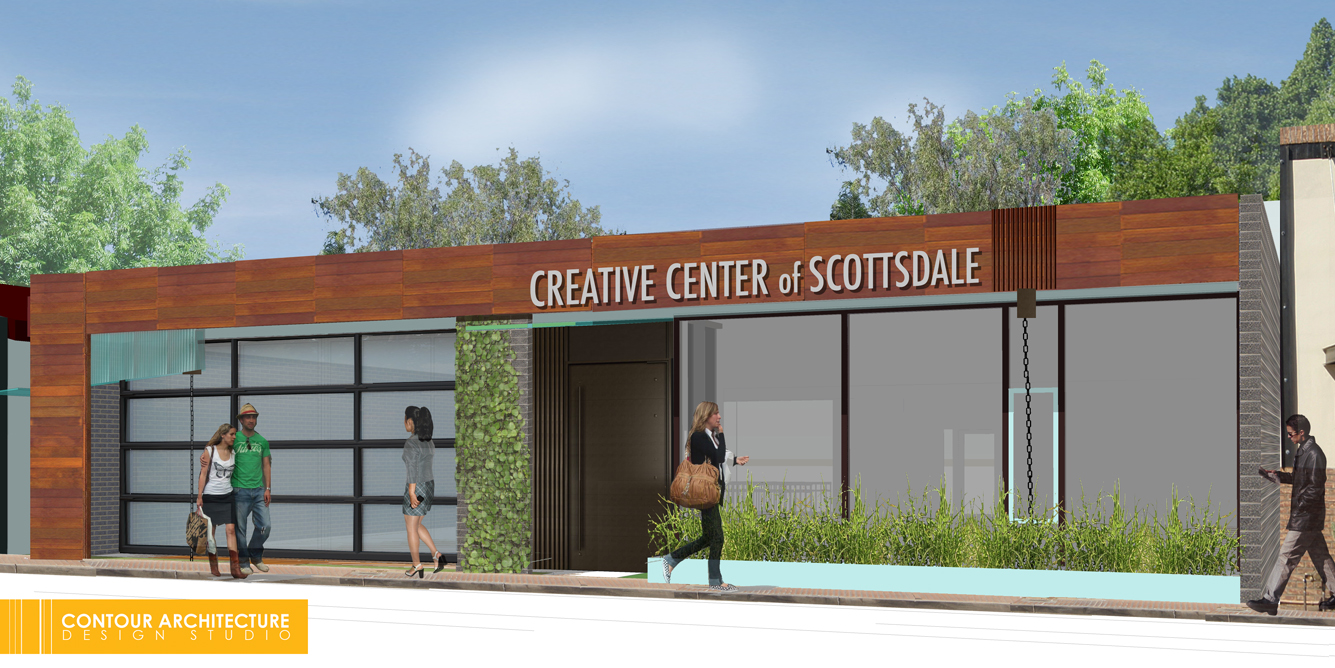 Originally published in the ARIZONA REPUBLIC about the Scottsdale Creative Arts Center, a project I am currently designing for owner Michelle Pelberg-Biely

A former Scottsdale shooting-supplies store with an underground shooting gallery will be transformed this summer into a gathering place for artists and other creative people.

The city Development Review Board unanimously approved a site plan, landscape plan and building elevations for the Creative Center of Scottsdale. The three-building complex along the western side of Scottsdale Road just north of Osborn Road will be renovated to accommodate the center.

The buildings along Scottsdale Road used to house Mandall’s Shooting Supplies, a family business that closed in 2004, and a former auto garage. The third building in the rear used to house Arizona Knitting and Needlepoint.

The iconic sign with a teddy bear holding a machine gun still greets passers-by and will be maintained as a part of the center.

Michelle Pelberg-Biely’s family purchased the property last fall, and she is converting it into the creative center.

“I will be very excited when we’re actually up and running,” she said. “It’s been kind of a learning experience.”

In the meantime, bullet casings found in the underground shooting range are being transformed into jewelry by local artist Sam Gray Wake.

“Downtown” Dan Semenchuk, a downtown advocate and unofficial spokesman for the area, said the project is a great example of adaptive reuse. He said the center will be a signature complex in the downtown area.

“It’s all about connecting with people with the purpose of building a creative and local community in downtown Scottsdale,” he said.

At the Development Review Board meeting last month, board member Eric Gerster said the project comes “with more soul than about 80 percent of what we see here,” while board member Matthew Cody said it’s a “wonderful interim use of the property.”

Brad Carr, senior city planner, said the buildings have a long history at what has always been a prominent corner going into downtown, and the owner plans to retain the character of the site, “work with it and take it a little further into the artistic side.” Also, the owner is looking to acquire adjacent, city-owned property to “bring that prominence even farther.”

Christina Noble, the project architect, said the intention is to preserve the history of the property, while looking forward. Also, the project will do a lot to improve the property, such as making it more pedestrian friendly and allowing for more activity along Scottsdale Road, she said.

A contractor has been hired, and Pelberg-Biely is applying for a construction permit this week. Exterior construction should begin in June, and the center should be completed this fall.

The complex is being designed and will be built in phases, Noble said. The first part will be the building exteriors and site improvements, she said.

“The architecture will have a bold, modern aesthetic,” she said. “We’re keeping the basic structures, adaptive reuse, but giving them a significant face-lift, putting a new skin over the buildings.”

The building that housed Mandall’s will include private studios that artists can lease and an open environment where artists can lease smaller spaces and share a communal area, Noble said. There will be large garage doors on the east and west sides, facing Scottsdale Road and the courtyard out back, she said.

The underground shooting range likely will be transformed into an art installation, she said.

The project will incorporate as many local materials as possible, Noble said.

“If we can find items that are made here in the Valley, that’s our first choice, within 500 miles, and then made in the United States,” she said.

The center also will be more sustainable with solar panels and space that can alternate between parking and an outdoor courtyard, Noble said.

The building that housed the knitting shop will become Sip Coffee & Beer House. It will be owned and operated by Travis and Tida Radevski.

“We’ve been in Arizona since 2006, we live in Old Town and love the idea of bringing people together, bringing the community together,” Travis Radevski said. “The two main focuses will be high-quality coffee and then 12 craft beers on draft and another 100 bottled beers. The coffee will come from a local roaster and most of the beers will be local beers as well.”

The venue will feature a wall of books where patrons can grab a book to read and “hopefully they will exchange them for ones they’ve read,” he said.

“Our goal is for people to come in and stay here, not leave, but talk, have their computers open and talk about projects they’re doing in the city,” Radevski said.

The couple hopes to open Sip on Oct. 1.

“I was very interested in the idea of recovering items that were no longer being used, and I had been kind of looking around for them,” she said.

Gray Wake then met Semenchuk and Pelberg-Biely and learned about the plans for the creative center. In the underground shooting range, Semenchuk found “tons of bullet shells.” He gave Gray Wake “boxes and boxes of all sorts of discarded ammo shells,” she said.

“Since then I have been working with them like crazy,” she said. “With the idea of my store, Broken Bullet, the bullet was made with the intent to kill and Broken Bullet was made with the hope for peace. Basically what I’m doing is I’m stopping the cycle of the bullet shell, from being repacked and reloaded where it could hurt somebody. Instead, it’s evolving into a peaceful place.”

People who enjoy shooting also are fans of her art. Her jewelry can be viewed on her Facebook page, at facebook.com/brokenbulletboutiqueballery/info.

“It’s also keeping the history of Old Town alive because they were shot right down the street,” Gray Wake said. “It’s just a different way to move forward with a bullet shell.”

Semenchuk said he was glad to be able to find a creative use for the discarded bullet casings.

“That serves the purpose of the creative center, to enable artists of all types,” he said.

If you enjoyed this article, you might also enjoy:
“Art Space Entrepreneur Aims at Historic Scottsdale Gun Shop”
“Sustainability in Action: Creative Center of Scottsdale”