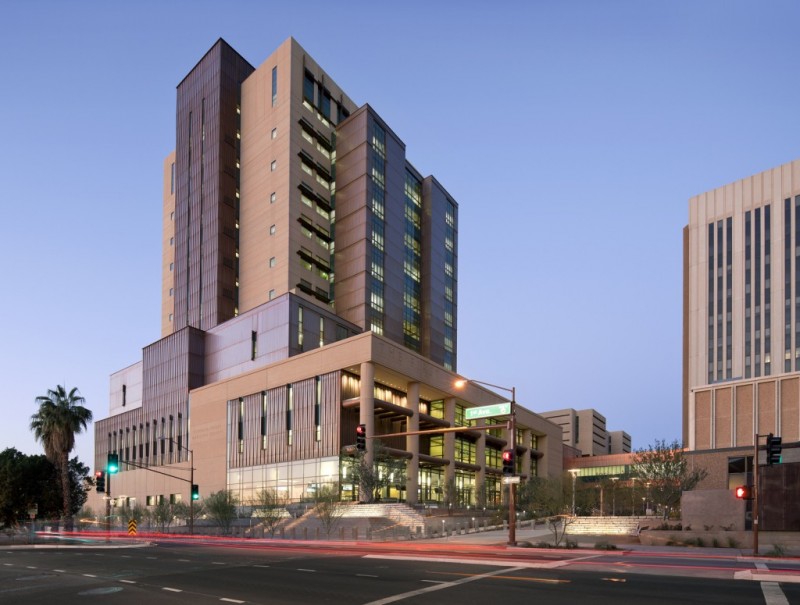 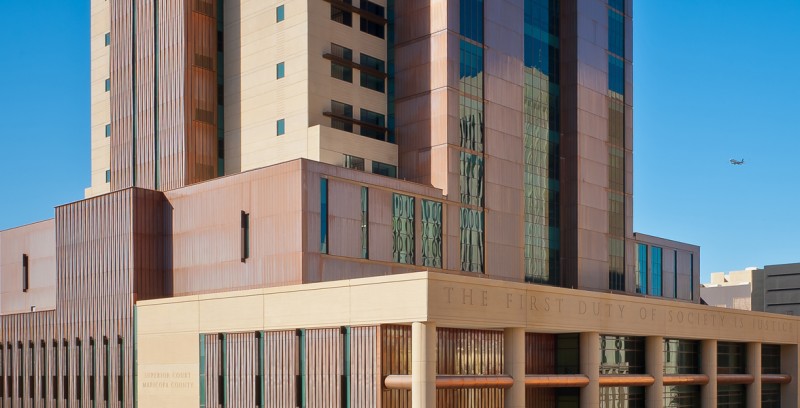 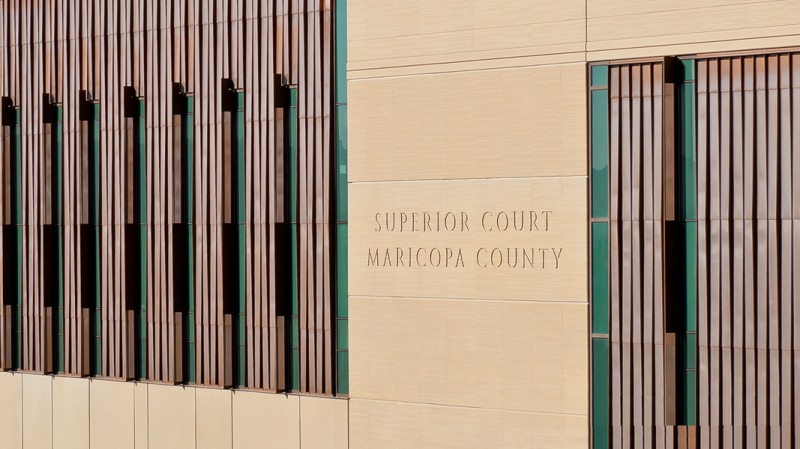 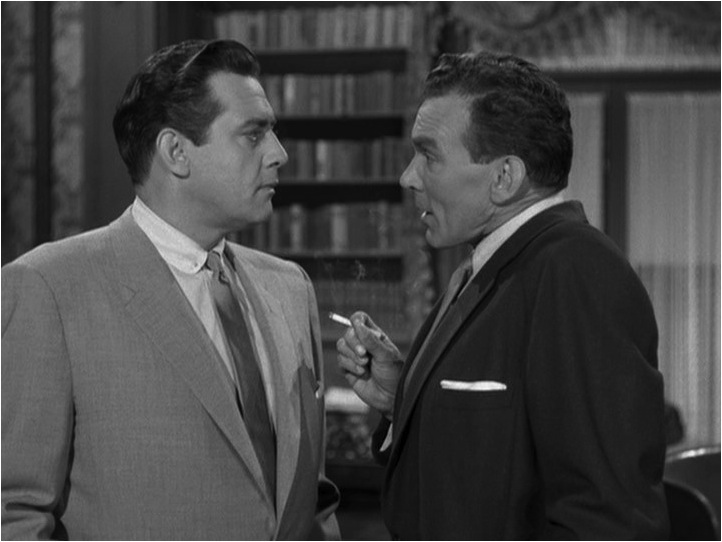 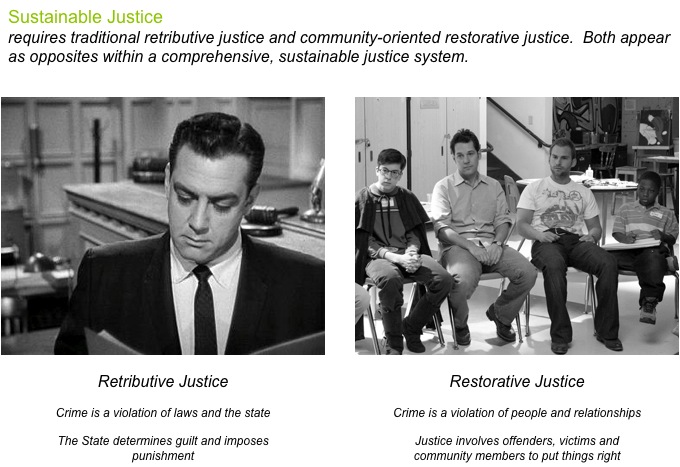 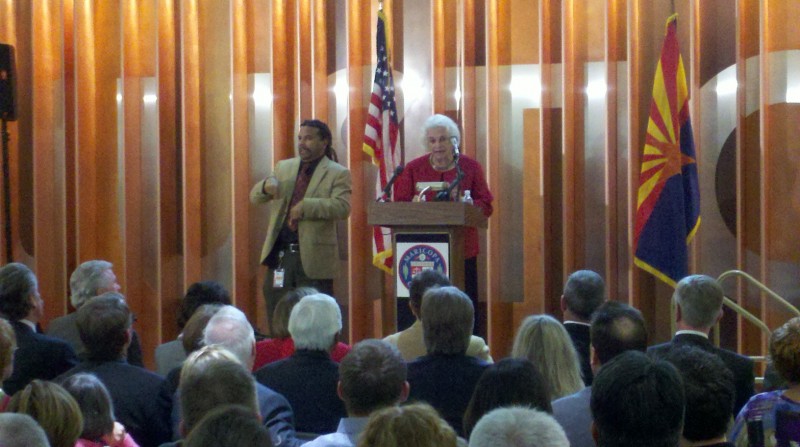 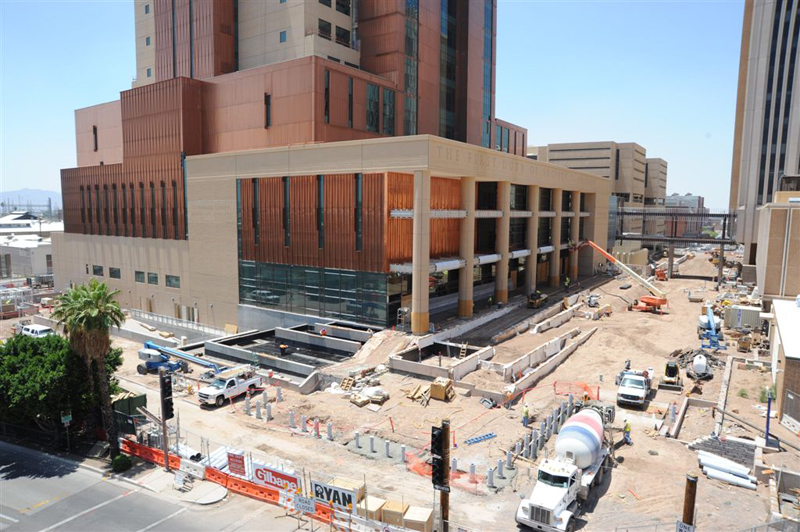 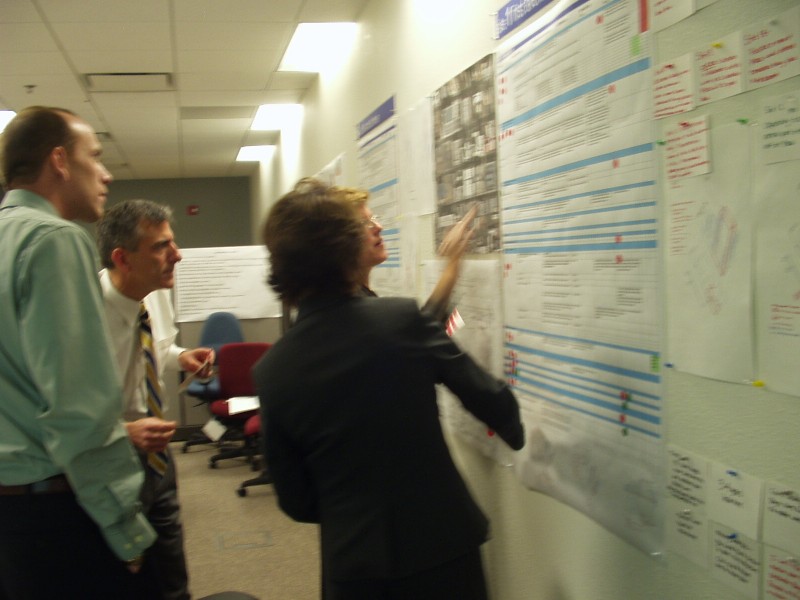 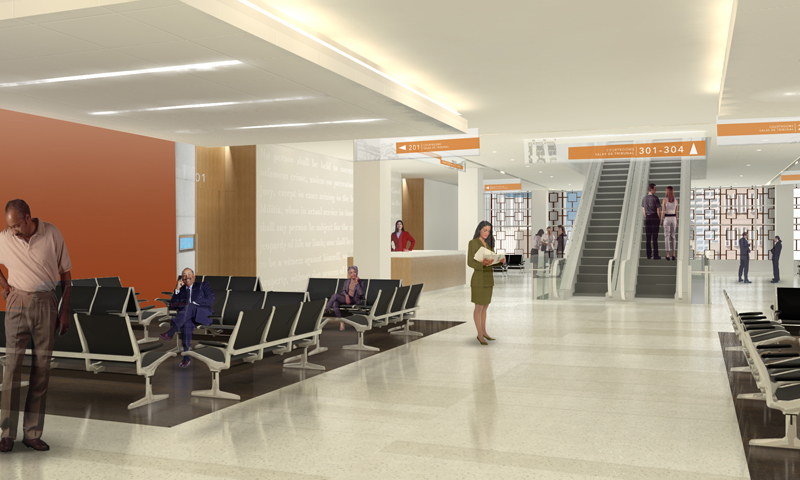 The justice system is about the resolution of opposites: defense & prosecution, justice & injustice, power & weakness.  What is interesting is not a balance between the two, but each side’s reliance on the other to define itself.   The new Maricopa County Downtown Court Tower integrates ‘Sustainable Justice,’ a system that requires both traditional retributive justice and community-oriented restorative justice. The spectrum extends from Retributive Justice, where crime is a violation of the laws of the state, the state determines guilt and imposes punishment, to its opposite, Restorative Justice, where crime is a violation of people and relationships and justice involves offenders, victims and community members coming together to heal the harms caused by crime.  Both approaches occur as opposites within a comprehensive, sustainable justice system that offers a multiplicity of processes based on seeking the best solutions for everyone impacted by crime.

The Maricopa County Downtown Court Tower integrates these contrasting approaches to justice – one about power, strength, adversarial positions and punitive solutions and the second about community, discussion, inclusiveness and even forgiveness – throughout the project as it expands and integrates the existing Maricopa County justice complex.  The new DCT will be a towering edifice that includes thirty-two courtrooms (twenty-two built now), Public Defender, the District Attorney, Clerk of the Court and various administrative offices designed to provide efficient, timely justice within a calming and therapeutic environment. The new tower will create an integrated campus that celebrates the future of restorative justice and honor the integrity of precedent law.

“In its architectural design and its visionary use of space and technology, this court tower will be admired and copied for generations”

The new Downtown Court Tower stands as a strong and dominating edifice on the Phoenix skyline.  Massive in its materials and form, the new building represents stability, dependability and power.  In contrast, the landscape and interiors offer a calming respite when visiting the courthouse. Most courthouse patrons visit rarely and many under great duress. Research reveals how ease of navigation, references to nature, and natural light reduce stress.  A winding path, terraced planters, lush vegetation, a future plaza integrating landscaping and public art, as well as numerous park benches throughout the site provide a cool and shaded escape into nature.  Expansive views of Downtown Phoenix to the north and South Mountain to the south allow those waiting for their trial to escape for a brief moment in the vista beyond.  Natural light and views of the sky, brought into each standard courtroom, provide a much-needed mental recharge for those listening and participating in court proceedings.  Additionally, color and exterior views not only provide character to a space, but also help visitors identify and remember their location, eliminating the stress of getting lost. Our design team utilized signs and environmental graphics as well as public art and physical cues throughout the building and site to ease visitors’ wayfinding experience.

“I am enormously impressed with what Maricopa County has done”

The Maricopa County Court Tower is a direct reflection of the Maricopa County community.  The design team performed an extensively researched programming and site selection process to integrate the needs of Maricopa County staff, the Downtown Phoenix community and the broader Maricopa County community. The County initially considered five project sites.  Each was analyzed for underground utilities, zoning requirements, FAA height limitations, archeological investigations, and flood zone requirements to form a basic understanding of each site for comparison. Beginning in programming, design was focused on process improvement, constantly asking, “How can we do this better?”  Greater access and collaboration across departments figured prominently for staff to improve productivity.  For example, collegial chambers allow greater interaction between judges combined with flexible courtroom scheduling while the RCC/EDC floors locate key players within close proximity to the quickly-changing court proceedings for ease of communication and shared team effort. Extensive departmental and community discussions integrated the detailed needs of future 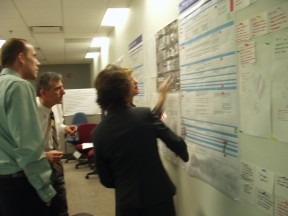 employees and visitors.  All functional needs such as parking, program, connection to the existing court complex and community amenities were tested against each site.  The final selected site was determined based on its adjacency to the existing Court Complex and its ability to hold 750,000sf.

While functional requirements were critical – they were not the only criteria.  The final location was selected because of its story.  While building the new tower, we would remove a mostly vacant parking structure that dominated a full city block.  The design team opted to use the project as an opportunity to define the County campus and reintroduce a welcoming central plaza landscaped with lush native plantings. The new plaza will anchor Constitution Avenue, a pedestrian-friendly spine through the Maricopa County campus, and the City of Phoenix Cesar Chavez linear park, a tree-lined path connecting City and County governmental agencies.  The plaza will also visually and symbolically connect the new court tower, representing the future of the County Court, with the historic courthouse, representing the traditions of the County justice system.

Sustainability was also a central goal.  Not only did the team incorporate native, low water use vegetation, natural light into each standard courtroom and ample views from the waiting areas, we also stressed the importance of a high-performance and energy efficient building as well as local materials.  The one-hundred-year building’s exterior uses locally sourced and durable precast concrete.  Copper, known by Arizona students as one of the five C’s on which our state’s economy is based, is featured prominently on the building’s façade and as an art installation in the lobby. Energy efficient features include: natural light, automatic lighting controls, energy efficient heating and cooling, low and no flow toilets and faucets, reduced heat gain glass, a highly insulating and performing building skin, and environmentally responsible interior materials. Durability, longevity and ease of maintenance were also viewed as sustainable issues.  Materials were selected based on their ability to sustain high traffic levels and the abuse of thousands of visitors a day.

Read about the Downtown Court Tower in the Correctional News, “Ahead of its Time: New High-Rise Criminal Court Designed to Safely Handle High-Volume Caseloads”